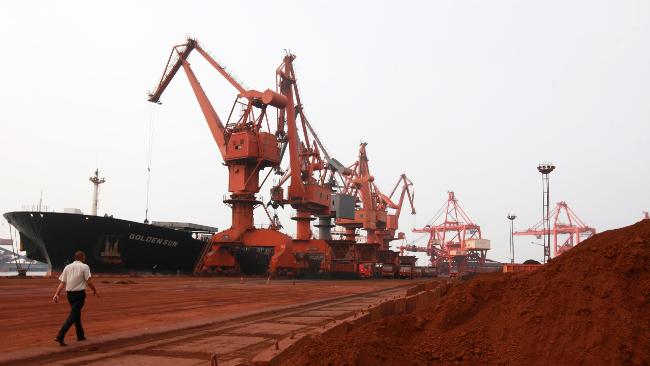 Rare earth ore about to be shipped from Lianyungang in east China to Japan   Source: AFP

CHINA is building strategic reserves in rare earth metals, an effort  that could give Beijing increased power to influence global prices and  supplies in a sector it already dominates.

Details of the stockpiling plans haven’t been made public. But the  outlines of the effort have emerged in recent statements from Chinese  government agencies, state-controlled companies and reports in  government-run media. The reports say storage facilities built in recent  months in the Chinese province of Inner Mongolia can hold more than the  39,813 tonnes China exported last year.

China controls more than  90 per cent of current global supply of rare earth metals - a group of  usually classified as 17 elements and sometimes are called “21st Century  gold” for their importance in such high-tech applications as  laser-guided weapons and hybrid-car batteries. Beijing has been  tightening its exports with a quota policy.

Many rare earth minerals aren’t actually rare, and China doesn’t  have a monopoly on deposits of any particular rare earth elements. The  US Geological Survey recently estimated that China has about half the  world’s 110 million tonnes of rare earth deposits, however. And mining  in the US and elsewhere fell off several years ago, in part because of  environmental concerns. Australia’s Lynas Corp, US-based Molycorp and  other companies around the world are ramping up mining. But a new mine  can take a decade to develop, and processing of rare earth elements will  remain concentrated in China for years.

Industry observers say  that if the stockpiling efforts further restrict China’s exports, that  could raise hackles higher in foreign capitals, where some governments  already are threatening to challenge Beijing’s quota regime by bringing  complaints to the World Trade Organisation.

“In my view, (a  reserve) makes the Chinese position worse,” said Steve Dickinson, an  attorney at the Seattle law firm Harris & Moure.

Further  limits on Chinese exports of rare earth elements also threaten to raise  costs for companies in an array of industries, including cellphones, oil  refining and high-technology batteries.

Chinese government  agencies manage other official stockpiles for commodities, such as  copper and corn, as well. And many governments world-wide amass similar  stockpiles to address temporary emergency shortfalls, such as grain  supplies in a drought year. The US manages a Strategic Petroleum  Reserve, but since 1994 has pared back holdings of a range of  commodities that had been held in a World War II era stockpile.

China  in recent years has expanded the number of commodities it holds in  reserve. It appears to actively manage their use, but does so with  little transparency and sometimes in ways that appear designed to  influence market prices, analysts say.

When aluminium prices were  soaring in early November, for instance, the State Reserve Bureau  blunted the rally by unloading more than 200,000 tonnes of aluminium  ingots at as much as 7 per cent below Shanghai Futures Exchange prices.  China’s lack of clarity over how exactly it manages its strategic  reserves of petroleum has roiled global oil markets and drawn criticism  from the International Energy Agency and others.
China isn’t alone in  looking to stockpile rare earth metals. The Japanese and South Korean  governments say they have amassed some reserves and US analysts have  called for a similar effort. But China appears to be ahead of other  countries.

The Chinese stockpiling, under the direction of the  Ministry of Land and Resources, began with a pilot project almost a year  ago in China’s primary mining region of Baotou in Inner Mongolia and is  related to the ministry’s assertion of authority in recent years over  mining regions. At least 10 storage facilities are being built and  managed by the world’s largest producer of rare earth metals,  government-controlled Baotou Steel Rare earth Hi-Tech Co. Chinese state  media reports say stockpiles may eventually top 100,000 tonnes.

The ministry and Baotou Steel Rare earth didn’t respond to questions for this article.

While  China says its deposits of rare earth minerals account for only about a  third of the global total, the country mines most of the world’s  marketed supply, which has raised concerns that China could deplete the  supply too quickly.

In their limited comments about strategic  reserves of rare earth minerals, Chinese officials have cited the need  to protect national resources, reduce pollution and save energy, the  same factors used to explain China’s export quotas.

A 2009 policy  paper on minerals by the Resources Ministry cited a need “to regulate  the supply-demand relationship in the market and implement government  industrial policy.”

The move to build reserves comes as China’s  supply of rare earth metals to the rest of the world already is  shrinking despite growing demand for the elements, which have strategic  industrial and military value in such products as night-vision goggles  and wind turbines. China’s exports of rare earth metals fell 9.3 per  cent last year.

US Rep. Mike Coffman called China “an unreliable  trade partner” in rare earth minerals and said he plans to introduce a  bill in coming weeks that may require the US military to hold an  unspecified amount of such elements. “The goal of the legislation is to  establish a competitive supply chain in the US,” and that may include  mandating a stockpile or setting conditions on when to form one, the  Colorado Republican said in an interview.

The American Security  Project think tank in a report released Tuesday recommended stockpiling  as “one of the best ways to prepare for a future shortage” of rare earth  metals before US mining and processing capability is expanded. The  group, whose board includes retired military officers and former  lawmakers, such as Gary Hart, who specialised in defence policy, and US  Senator and John Kerry (D. Mass.), cites a Pentagon estimate that while  only 5 per cent of demand for rare earth metals in the US comes from the  military, the US is nevertheless “completely reliant on China for the  production of some of (the Pentagon’s) most powerful weapons.”

But  some politicians warn that official stockpiling by the US would only  make the government a new competitor in an already strained supply chain  that, despite its strategic importance, is relatively small. China’s  exports of rare earth ore, metals and compounds last year was valued at  just $940 million. Sen. Lisa Murkowski (R. Alaska), who plans soon to  reintroduce a bill to support the US rare earth industry, favours first  studying the merits of a strategic reserve rather than mandating the  creation of one, a spokesman for the Alaska Republican said.

The  US Department of Energy in 2009 proposed a middle road. It outlined how a  Strategic Military Stockpile Program would include “limited physical  stockpiles” of metals and other resources but be supplemented by  “friendly nation agreements and long-term supply-chain partnerships.”

In  recent months, the high-tech-focused nations of Japan and South Korea,  both of which are dependent on China for rare earth supplies, have  highlighted stockpiling strategies. The European Union is weighing  reserves too, Reuters recently reported, and British lawmakers last  month discussed their country's strategic-materials strategy.

It  is unclear how much day-to-day control Beijing authorities actually have  of their rare earths industry. The Resources Ministry in policies  dating to 1999 repeatedly has described rare earth production as  disorderly. Nor has the government spelled out what supplies will get  diverted to national stockpiles.

But the ministry increasingly is  asserting authority over rare earth mining as part of a broader program  that has seen the government move to manage more than 50  commodity-production zones producing coal, iron ore and the rare earth  element vanadium. Eight rare earth zones were put under national  administration in 2006, while Beijing has specified that more than 1,600  mining blocs are subject to central-government planning policies and  hundreds of mines will be closed.

The ministry extended its reach  in January to include a region in southeastern Jiangxi Province, where a  particularly scarce class of rare earth minerals is prevalent. That  move, announced in a one-paragraph notice dated January 4, covers 11  rare earth mining blocks over a little more than half an acre in the  Jiangxi area of Ganzhou. The area is known for deposits of particularly  rare, premium-priced “heavy” rare earth metals, such as terbium, which  is used in fuel cells.

“The announcement is to promote an overall  planning over the rare earth mining industry,” said Chen Zhenheng,  deputy director of the Chinese Society of Rare Earths industry  association.

Estimated  remaining REE Reserves A+B+C1+C2+r/b = 63,300,000 Kilograms with an  estimated average TREO grade between 0.30-0.37% from 2293m to the  surface at 2353m (first 4-5 years of production)
Previously produced 80% of the former Soviet Union’s REEs from 1960-1991
30 years of proven metallurgy, with approximately 65% recovery
Kutessay II produced all 15 REEs along with Lead, Zinc, Silver, Bismuth, Molybdenum, Thorium Tin, and Copper.
Kutessay II also has Niobium, Tantalum, and Hafnium and is open at depth.
Bulk  sampling of stockpiles in the Kutessay II pit, sampling of the 2263 m  adit and core sampling from the drill holes planned above. Under the  supervision of Dr. V Kosynkin, Information and Research Centre Ltd. will  use these samples to conduct milling, recovery and concentrate upgrade  tests.
Deep drilling under the 2213 m horizon of Kutessay II to confirm and possibly expand the historical REE tonnage estimate.
The average oxide price of REE minerals at KutessayII was $48.56 per Kg (April 22, 2010)

Aktyuz Ore Field: KutessayIII
The  drill target starts 75 to 100 m below the surface of the previously  identified, mineralized horizon, Kutessay III. The chargeability and  resistivity images produced by the geophysical study depict the shape of  the metallic sulphide anomaly as a dome structure that expands and  strengthens to the image cut-off point at a depth of 400 m, in a similar  fashion to the Kutessay II mine, but double the size.
dumps

Beryllium  deposit with historical reserves of &#1057;1+&#1057;2category:  ore 9,245,000 t., containing 11,701 t of Beryllium oxide at an average  grade of 0.128%*… Beryllium’s price is $356,000.00/t USD
By  modernizing the existing infrastructure, the mine could be developed  after refurbishing the concentrating mill, tailings line and tailing  dumps
Increasing Beryllium reserves is possible through exploration of deposit pit flanks and to the depth.
More than 70% of total reserves of the deposit can be mined by open pit
Neueste Preisangaben zu Beryllium aus dem Internet, durchschnittlich 500$/kg (schwankend)

Wo gehts hin? who know's