The case, Gilead Sciences, Inc. v. Teva Pharmaceuticals USA, et al., is set for trial Feb. 20, 2013, in the U.S. District Court for the Southern District of New York. Teva may launch copycats of Truvada (emtricitabine/tenofovir disoproxil fumarate) and Viread (tenofovir disoproxil fumarate) June 1 if there is no ruling holding that the patents-in-suit are invalid or unenforceable, according to an agreement between the two drugmakers that was filed Tuesday.

Gilead sued Teva in 2008 for infringing on two patents covering the HIV treatment Truvada. Teva maintains the drug’s ’245 and ’396 patents, owned by Emory University and licensed solely to Gilead, are invalid due to obviousness-type double patenting.

There’s money to be made in the global generic drug market, but it helps to know which countries are up, which are down and which are coming into their own? Which companies are working together, who’s suing whom and how could developments inside top industry players affect expansion for makers of generics and biologics?

The answers you need today to identify the best — and safest — business prospects for the years ahead can be found in World Generic Market Report 2012.

With original research, country-by-country comparisons and five-year market forecasts, this two-volume report gives you the power to identify — and seize — the best expansion opportunities around the globe. Hundreds of millions can be made, as evident with Revatio. Don’t delay. Order your copy of this must-have report today!

Gilead Sciences (NASDAQ: GILD)‘s stock had its “overweight” rating reaffirmed by Piper Jaffray in a research note issued on Friday. They currently have a $85.00 price target on the stock.

Gilead Sciences last issued its quarterly earnings data on Tuesday, October 23rd. The company reported $1.00 EPS for the quarter, beating the Thomson Reuters consensus estimate of $0.94 by $0.06. The company’s quarterly revenue was up 14.5% on a year-over-year basis. On average, analysts predict that Gilead Sciences will post $3.85 earnings per share for the current fiscal year. 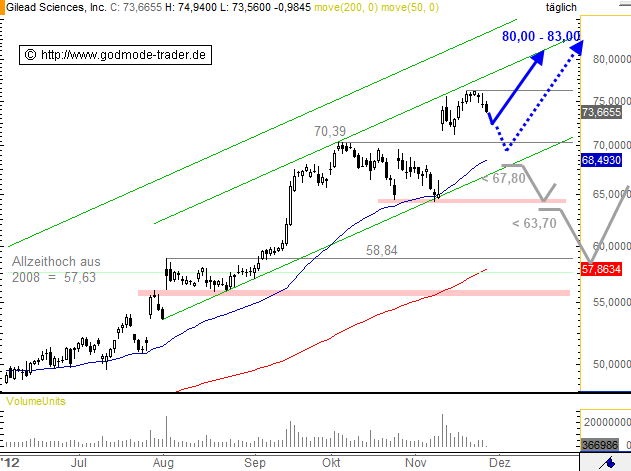 Gilead Sciences at The American Society of Hematology Meeting and Exposition
Saturday, December 8, 2012  through Tuesday, December 11, 2012

Storm30018 : A Biotech to Buy Before the Conference

Investors will aim to compare the efficacy, potency, and safety to Gilead's (GILD) GS- 1101 (PI3K inhibitor) and Pharmacyclics' ibrutinib (BTK inhibitor). Updated data for GS-1101 will also be presented.

04.12.12 07:44
Good news flowed in at Gilead Sciences Inc. ( GILD ) from Europe regarding its drug Viread. The European Commission (EC) cleared the drug for a couple of additional indications.

Following the clearance by the EC, Viread (as a combination therapy) will be marketed in the EU for treating HIV infected children aged between 2 and 18 years. The EC also approved Viread for treating adolescents, aged above 12 but less than 18 years, infected with chronic hepatitis B virus.

Moreover, the EC also cleared Viread tablets to be marketed in the EU at three new lower dosages (123 mg, 163 mg and 204 mg) for treating HIV infected children aged between 6 and 12 years.

We note that Viread is already available in the EU as a combination therapy for treating HIV infected adults and also for chronic HBV. Approval for additional indications in the EU would further boost Viread's sales potential. Viread competes primarily with GlaxoSmithKline 's ( GSK ) Epivir.

We remind investors that in January 2012, the US Food and Drug Administration (FDA) cleared Viread as a combination therapy in children aged between 2 and 12 years for treating HIV. The US agency cleared Viread in doses of 150 mg, 200 mg and 250 mg for children in the age group of 6-12 years. Additionally, the FDA also cleared an oral powder version of Viread for children aged between 2 and 5 years.

Gilead Sciences (GILD) was one of the top S&P 100 gainers list for November, 2012; AIDS advocates decry AIDS drug profiteering by Gilead and CEO John Martin, noting that record earnings come on the heels of G

An earlier Reuters news item from late October noted, “Gilead's third-quarter sales of HIV drug Atripla rose 9 percent to $865.4 million, which was short of the $876 million expected by analysts, according to numbers published by BMO Capital Markets. Sales of HIV drug Truvada rose 8 percent to $804.2 million, beating analysts' estimate of $762 million.” The article also noted that third quarter revenue was up 14% overall to $2.43 billion, as the company also raised its full year sales forecast to $9.2 billion.

Storm30018 : Why Vertex Lost in November

Storm30018 : Gilead Can Cure Your Portfolio With Sofobuvir

Gilead Sciences (NASDAQ: GILD)‘s stock had its “buy” rating restated by analysts at Guggenheim in a research report issued to clients and investors on Monday. They currently have a $87.00 price target on the stock.